A return to the blog - Black Powder and Hail Caesar

Greetings reader!
It has been a while since my last post, more than two years actually. Recently I've been picking up some more steam with the hobby, resulting in miniatures painted and battles fought!

Here are some pictures of this weekends wargaming, involving Black Powder and Hail Caesar.
For my Black Powder armies (got to provide both sides) I'm working on a Russian and a French. I recon I'm about half way collecting and painting, having six infantry units ready for both sides. Also I think I've settled on a basing method, 4 per base on a 1,5cm frontage, with the depth of the base varying between 3 and 4,5cm. All my Russians are now based in that manner, and the French are up next for base-surgery.

The battle involved 6 infantry units a side with a artillery battery and a unit of hussars, two brigades for each player. Because of the small game size in Black Powder terms I decided to double the stamina values for all units. This seemed to work out well, causing some more eb and flow in the development of the battle. Also I decided broken brigades would be allowed to be rallied, but in the end the situation didn't come up. Lastly we used the Hail Caesar rules for disorder, calling for a special break test on the roll of 6 during shooting instead of causing disorder immediately. This caused some harrowing moments when the Russian grenadiers went in for a final push against one of the French brigade and closing fire caused them to fall back disordered. I'm not quite decided on what I think about this effect as in the standard Black Powder rules it would never occur. It does make charging that more dangerous! In the end the Russian main assault on the French center faltered and the French were able to crush the Russian right flank, breaking my last brigade. 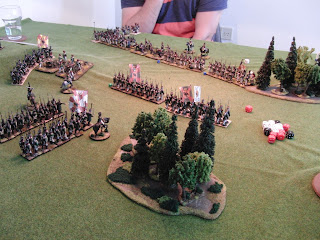 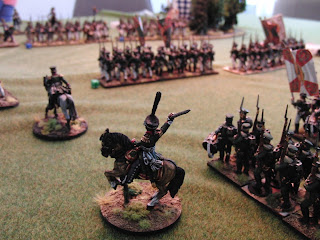 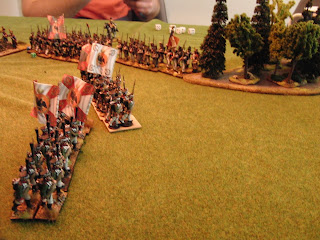 Next up some Hail Ceasar game. This is the first time I actually played the game, after having the book for some years now. Inspired by using the break table in Black Powder I did a little test run with some Old Hammer models which turned out quite nicely. I then proposed to give the game another go with my friend and most regular opponent Guy who was happy to comply. Thus we dusted of those veteran soldiers of the Empire and threw in some Bretonnians to make two nice armies of 6 infantry, 3 ranged infantry and 3 heavy cavalry units. Those were quite sufficient to fill a 4*6 table and it was a great game.
My Knights of the Realm met with initial succes, breaking the enemy left flank infantry brigade, while his knights came crushing down on my left and center. This caused the balance to tip over in favor of my opponent. My general made some heroic charges but went down in the melee. His second in command did the same, and found the same fate. In the end the army was led by the lowliest clown, which caused a general rout.
Great games all in all and I hope to return this blog more often than I've done in the last couple of years. Cheers to you all. Also please leave a comment when you've enjoyed the photo's! 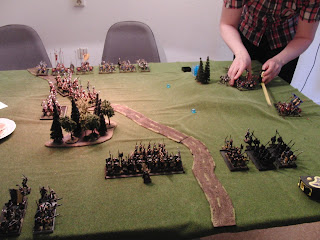 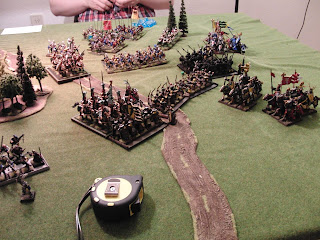 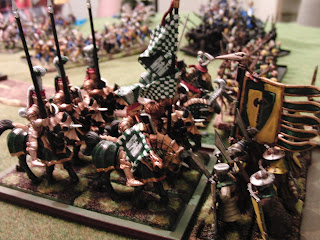 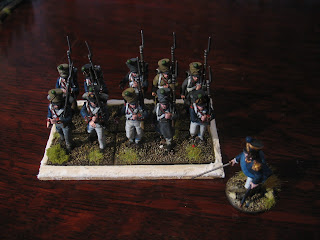 In preparation for Sharp Practice 2 I dug out some old bases I had lying around and made some new ones for my Russian regiments. These are meant to move the 10 men squads while maintaining the basing method I use for Black Powder, thus keeping the miniatures compatible with both games. 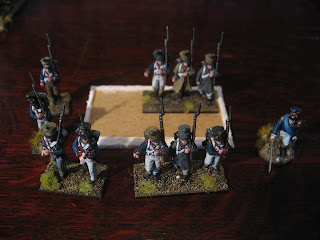 On the painting bench I have some innocent bystanders for the Napoleonic era, which hopefully will make some nice characters for SP2. 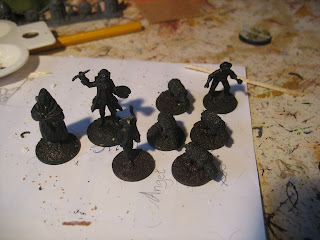 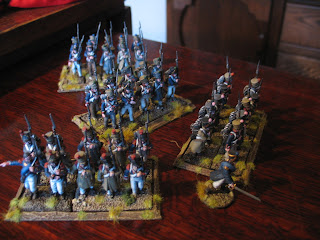 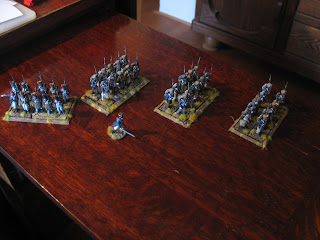 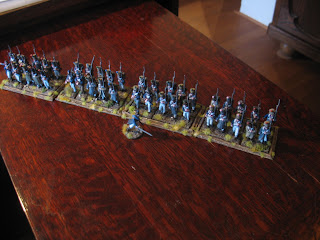 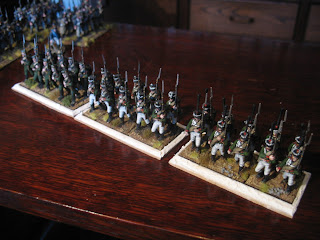 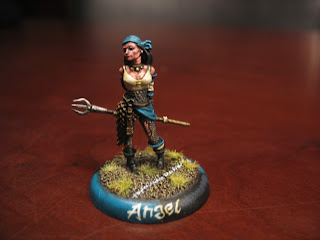 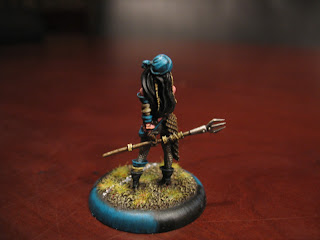 In anticipation of the upcoming Sharp Practice 2 rules I've started painting some of my skirmish based Napoleonics. Here are three Dutch grenadiers; "Leve de keizer!".
I hope the rules have been streamlined along the lines of Chain of Command, doing away with the long list of shooting modifiers for one thing, and clarifying the actual chain of command. 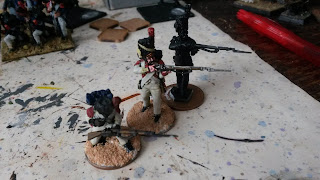 Lion Rampant - a skirmish in the Hook & Cod wars

The location of the fighting is somewhere in the Low Countries during the final stages of the Hook & Cod wars (https://en.wikipedia.org/wiki/Hook_and_Cod_wars i.e. de Hoeksche & Kabeljouwse twisten) One of these days the largely fictional characters of Jan van Schaffelaar and Perrol with the red hand might make an appearance. They are depicted in Oltmans' De Schaapsherder (the Shepherd) as sworn enemies since they both fancy the hand of certain young lady. The story has a very dramatic ending in the church of Barneveld, where Jan van Schaffelaar and his men are surrounded by the enemy. Presented with an ultimatum to hand over their leader van Schaffelaar decides to keep the honor to himself and jumps from the tower. He survives the jump but is presently bludgeoned to death by the peasant rabble waiting for him. Maybe these events would make for an interesting scenario in the future!

Here are some more painted mini's from the Retreat from Moscow range. 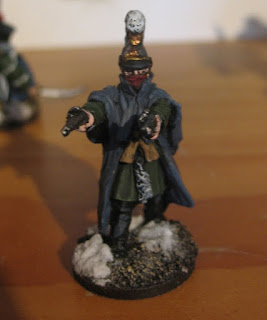 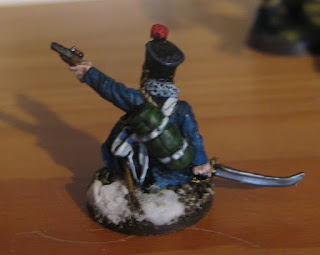 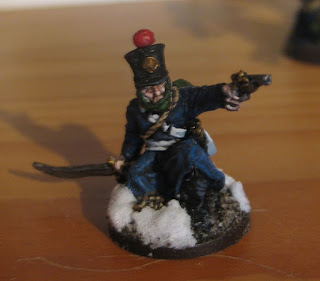 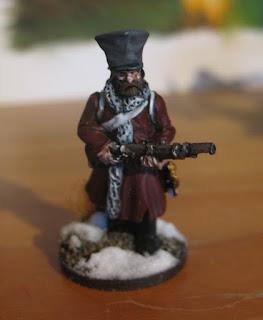 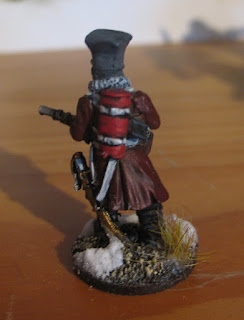 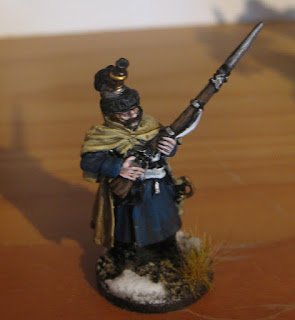